Both Rufforth and Knapton were historically parishes within the West Riding of Yorkshire. In 1974 they were transferred to Harrogate in the new County of North Yorkshire. In 1988 Knapton Parish was absorbed by Rufforth Parish and became the Parish of Rufforth with Knapton. The Parish was transferred to the City of York in 1996 and is part of the Rural West Ward. Acomb Grange became part of Rufforth Parish prior to 1520. The parish is predominately rural, with two villages, a small settlement on the Boroughbridge Road and a very small area, Acomb Grange on the city boundary at Chapelfields.

Rufforth, Knapton and Acomb Grange are all mentioned in the Domesday Book. A settlement at what is now Rufforth existed in Saxon times. The Domesday Book entry refers to land ownership in Norman times. Modern names such as Southfield, Lowfield and Nodderys (north) are all derived from the medieval field system. The Domesday survey indicates almost 1000 years of established settlement.

Both Rufforth and Knapton have status within the Green Belt. 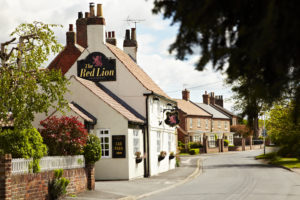 Knapton lies less than 4 miles to the west of York city centre within the York outer ring road, the A1237; it has always been surrounded by agricultural land.  The hamlet of the middle ages had open fields, evidence of which is preserved in local names, Lowfield and Northfield and the Enclosures Act of the 18th and 19th centuries created a landscape of fields defined by hedgerows; some of these field boundaries preserve the ‘s’ shape formed by the medieval ploughing system called sellions.

The village has a single principal street, Main Street, and, on the east side, a Back Lane. It is likely that the village was originally laid out as a single-sided village with the main street lined by houses and back lane by farm buildings, with easy access to the adjacent fields. Later expansion has taken place by new buildings on the west side of Main Street but no back lane has been created there.  Despite the proximity to the City of York, the surrounding countryside has helped Knapton maintain its rural appearance with most buildings being contained within an envelope created by Main Street and Back Lane. A Chapel at Ease, Tithe Barn, and Blacksmiths Forge have all gone and many of the old farmhouses have been replaced with new homes or have been heavily converted.

Knapton’s rural heritage can be found in the Pinfold at the north end of the village. Dating from the 18th century, on the initiative of the Parish Council, it was restored by Bishop Burton College in 1992. St Peter’s Farmhouse and two cottages on Main Street also have listed status.

In late 2005 an informal survey indicated that there were 96 dwellings in the village envelope occupied by 173 adults (age 16+) and 49 children. Knapton has few amenities but has a thriving local pub; the Red Lion, a quintessential English bistro. 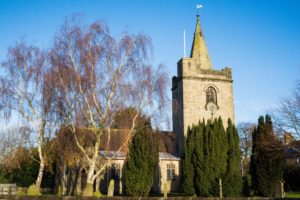 A linear settlement village, Rufforth sits astride the B1224, the York to Wetherby Road; it is approximately 5 miles from York. A settlement at what is now Rufforth existed from Saxon times and an entry in the Domesday Book deals with land ownership in Norman times.

The surrounding countryside is mostly flat with the recent exception of landfill mounds at Harewood Whin and open agricultural land has a productive classification of grade 3, good to moderate quality. Many fields are large but, in contrast, strip fields once attached to smallholdings remain visible behind several village properties. The Enclosures Act Awards of 1795 apportioned land among villagers giving Rufforth its modern form. The Act also awarded the village pond to be used as a watering place and the sandpit to be used for the upkeep of highways.

Rufforth village developed from a line of cottages and smallholdings into the village it is today; a number of cul-de-sacs have developed from former farmyards and paddocks; the Village is a compact area of housing surrounded by open countryside.  In the 19th and early 20th centuries, the Middlewood family had great influences on Rufforth, having purchased land in the mid-1860s. Sarah Middlewood rebuilt the church in memory of her late husband and later purchased a property known as the Manor House which became the vicarage, this was later sold and a new modern vicarage built.  The Village Institute was given to the village, historically as a place of learning, and two farms of a distinctive style, East View and Hawthorn House were also constructed by the family.

The pump and trough in Rufforth, situated in the village garden, All Saints Church, and Pear Tree Farm House, as well as the Pinfold, are all listed. A barn and gin gang at Rufforth Grange were listed in 1987 but de-listed in 1993 as the building was derelict and damaged. Rufforth pond and Sand Dykes at the western end of the village were given to the Parish Council under the Enclosures Act. The pond was to cool the wheels of farm carts travelling through the village and Sand Dykes was the sandpit for building construction.

The Village Garden, Rufforth, facing the Chapel has paths depicting the runway layout of Rufforth Airfield and the Horse Chestnut tree adjacent to the Village garden is protected by a Tree Preservation Order and the Yew Trees in the school grounds are reputed to mark the place where dead soldiers from the Battle of Marston Moor lie.

In 1940, the land around Rufforth was selected as a suitable site for an airfield that opened in 1942.  Find out more about RAF Rufforth >

Village Amenities
On the edge of the Airfield are Rufforth Playing Fields and Club House, with tennis courts, cricket, and football pitches, a small children’s play area is by the clubhouse. These fields are held in trust for the village. A public footpath, connecting Rufforth to Askham Bryan runs along the edge of the main runway it having been reinstated before the return of gliding.

Rufforth now has a new village school, built in the 1970s by West Yorkshire CC, and in addition to the Church, Chapel, Village Institute, Community Hall, and Recreational ground it also has an Outreach Post Office, and the Old School has become a tearoom.

Rufforth has a population of approximately 560.